Whenever you hear someone mention Autism what do you think about? Do you think about the hand flapping some kids do, or behavior problems in public? Well since Brodyn’s diagnosis we have learned a lot about Autism and it’s different forms, but most of all we have learned to live without sleep. When I hear someone new in my life has a child with Autism I think “are you sleeping?”

Many kids in the spectrum have problems sleeping in one way or another. Some take forever to fall asleep, some wake super early, some wake all night long and are a danger to themselves if they can get it if their room.

So what sleep issues do with deal with you ask? Well the first time it because a real problem it was Brodyn taking HOURS to fall asleep. No matter what we tried or changed he would just lay there flipping and flopping missing hours of sleep he needed every night. When worked and worked to make a schedule that would get him ready for bed to be able to sleep early enough and after months we finally locked it in.

But then came the waking up 3-4 times a night for hours leaving him exhausted every morning for therapy and school. When your child is tired it’s hard for them to learn and grow and when they can’t control their lack of sleep it makes for long data for the whole house.

After months of waking 3-4 times a might we changed some things, bought some things, and worked out a good flow again. But we only had like 5 days of good enough sleep and then he started waking up at 2-3am for the rest of the day.

Now I know we aren’t the WORST case as far as sleep and Autism goes, but we aren’t the best either. We try and hold on to what we do get and be thankful. But I’m going to show some pictures of Brodyn’s bed and explain a little of what we have tried and where we are now. I know a lot of parents already do these things but when I was searching for help and ideas I ran across some I didn’t know about.

So first picture is what we call “mommy pillow” Brodyn has always been attached to me and I am his comfort so when I was getting ready for a surgery that would prevent me from being able to pick him up or lay with him for weeks I decided to make this. I bought a wig close enough to my hair at the time and sewed it onto a body pillow. Then I added rice to socks and made arms for weight since he likes my hand on his back to fall asleep. And finally I used one of my shirts and periodically I spray it with my perfume. This worked wonders for Brodyn and he still sleeps with it every night.

This is a picture of his bed! He has a bed tent that makes the room feel smaller as well as keep it darker. We also bought a special sheet for his bed so he couldn’t kick the covers off and get cold. He has a weighted blanket, special pad for his bed to be perfect for him, stuffed animals to fill some space and his bed set. 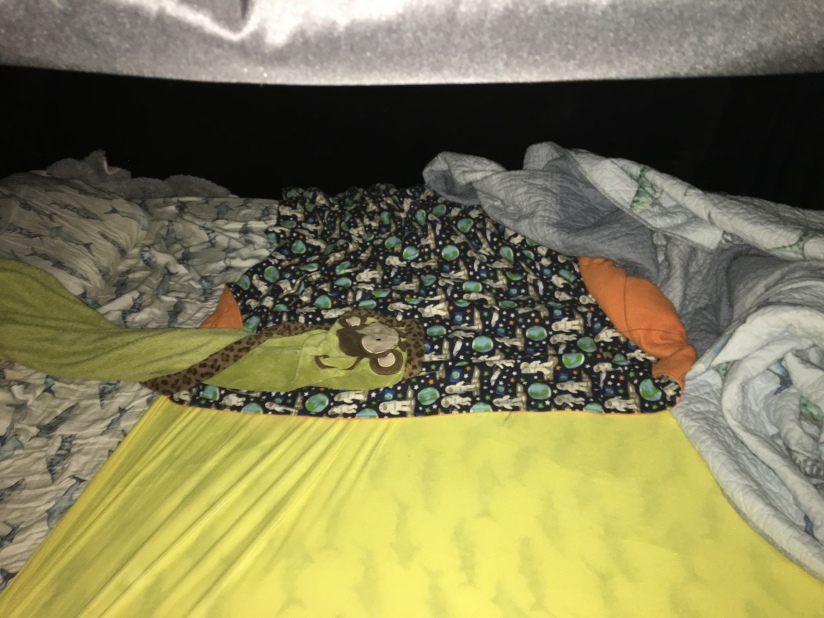 What you don’t see in the room are things like his iPod with special song mix that he has used everyday since he was a baby. He has a humidifier to keep moisture as well as block out noise. His dresser is in his closet for safety reasons and he has locks on the doors so he can’t open the closet and get hurt. He also has a baby gate on the door so when he wakes in the night he can’t get out and escape.

There was no ONE thing that helped Brodyn when it came to sleep. He still has really bad nights of sleep and every once in awhile I think he gets so exhausted that he sleeps good. But with all of these things combined we have been able to get him some sleep and most nights for him it seems to be enough. But as parents it’s not enough for us since we can’t just go to bed when he does every night.

So if you are struggling right now with your child and lack of sleep just keep trying to find the combination of things that will work best for your child. It may seem impossible but it will click if you just keep working it. And most importantly know you aren’t alone in this. There are others just like you that are going through the same thing every night! ❤️❤️

I am a military wife of two little boys one attitude filled 2 year old and one 3 year old with Autism. Both of which are my life and I spend my days playing, cleaning, and coming up with ways to save money while expanding their learning and education. I love to come up with new games and activities that I can make myself to add to our fun. View all posts by parentingonthecheap